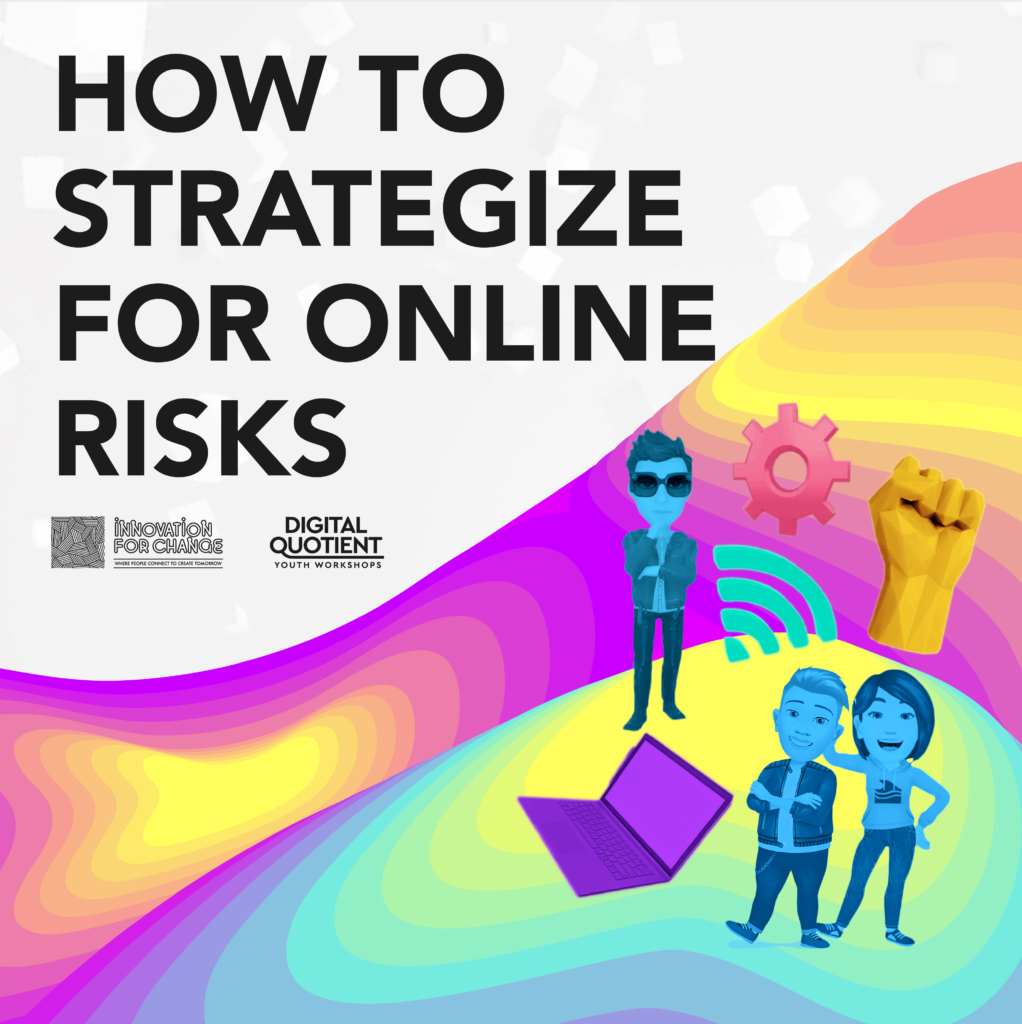 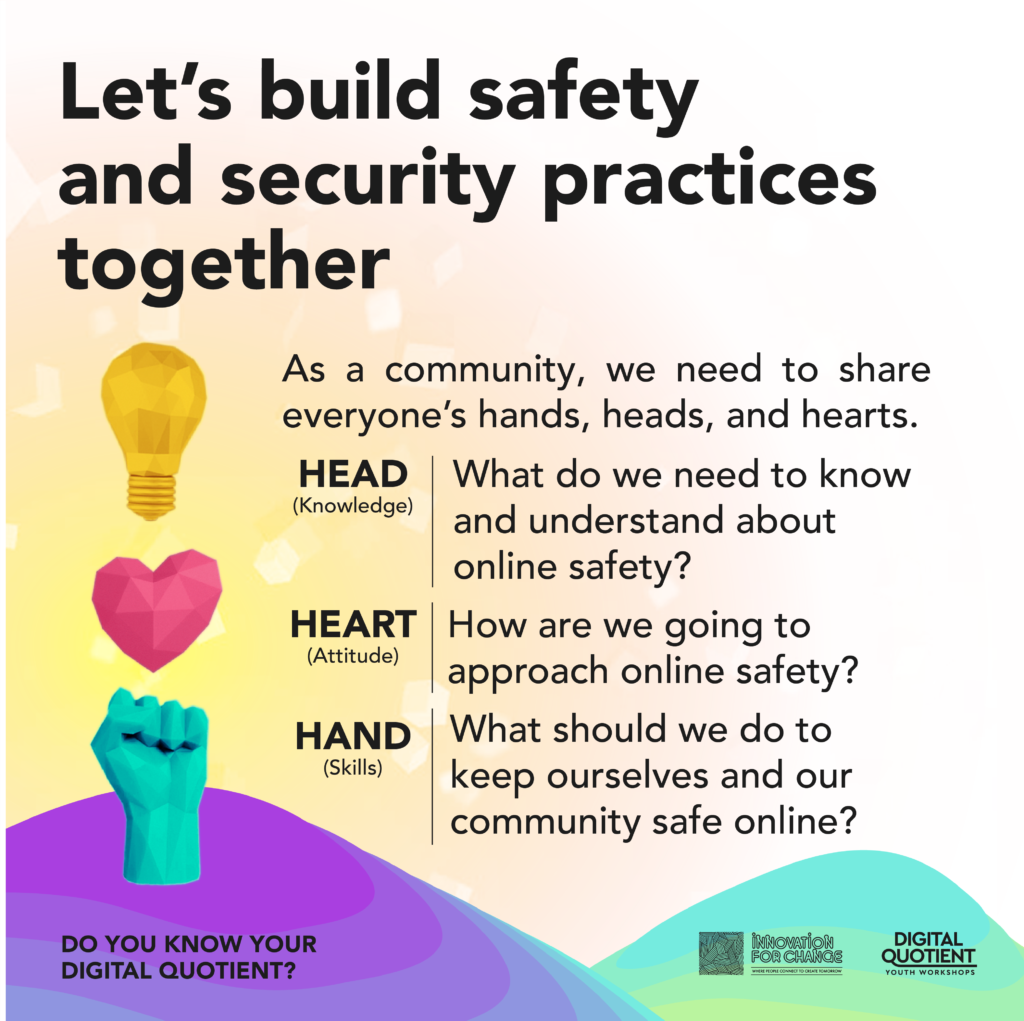 What is YOUR Digital Quotient?

There is no absolute or fixed meaning to Digital Quotient, according to one of the workshop facilitators. Rather, DQ puts emphasis on the process of setting standards for our/community’s own safety. Making a synthesis by using three areas (i.e. hand, heart, head) was helpful to take in the ideas. The importance of inclusion was highlighted and that DQ does not apply only to an individual but also to a community or as a collective group.

One participant raised a very important question on the meaning of ‘community’ which allowed us to recognise and allow different interpretations. Facilitator clarified and emphasised that there are layers to a community and it is a process saying “you get involved wherever you are in any layer or in the circle of influence and not let an outsider define what safety means to you.”

The trap of too much risk assessment

Three case studies on planning for safety were provided by the facilitators. Although these case studies all differed in terms of scenario, learning objective was common: to devise a strategy which prioritises the safety of the community.

In a real-life scenario, one should assess the risk first when discussing strategies, however, the facilitator had encouraged participants to spend less time in risk assessing but instead invest more time in strategising. This guide was given as facilitators were mindful of the time constraints but in the later session some participants resonated the importance of not falling into the trap of too much risk assessment while not being able to pull off a sound strategy.

One participant commented that he was unsure whether the strategy he came up with was a good or bad input. It was a point when the facilitator reassured all participants that the purpose of the whole discussion was not to come up with a ‘perfect’ plan or strategy but highlighted the need to focus on the process of discussion. How people react to the given situation, how an exchange of opinions builds up to plans and consensus, etc.  Another facilitator also added that the process of identifying risk and threat is part of risk management as people are aware and accept the fact that the risk can any time happen to them. The point of being open to risk and accepting it was one of the key lessons that was reiterated throughout the workshop.

“When we talk about mitigation, we are not just talking about avoiding risks. A person, an organisation or a group of people can also decide to accept the risk. Part of mitigation is also by identifying the risk or the threat and accepting it.” – facilitator C

Rather than Preventing an Incident… 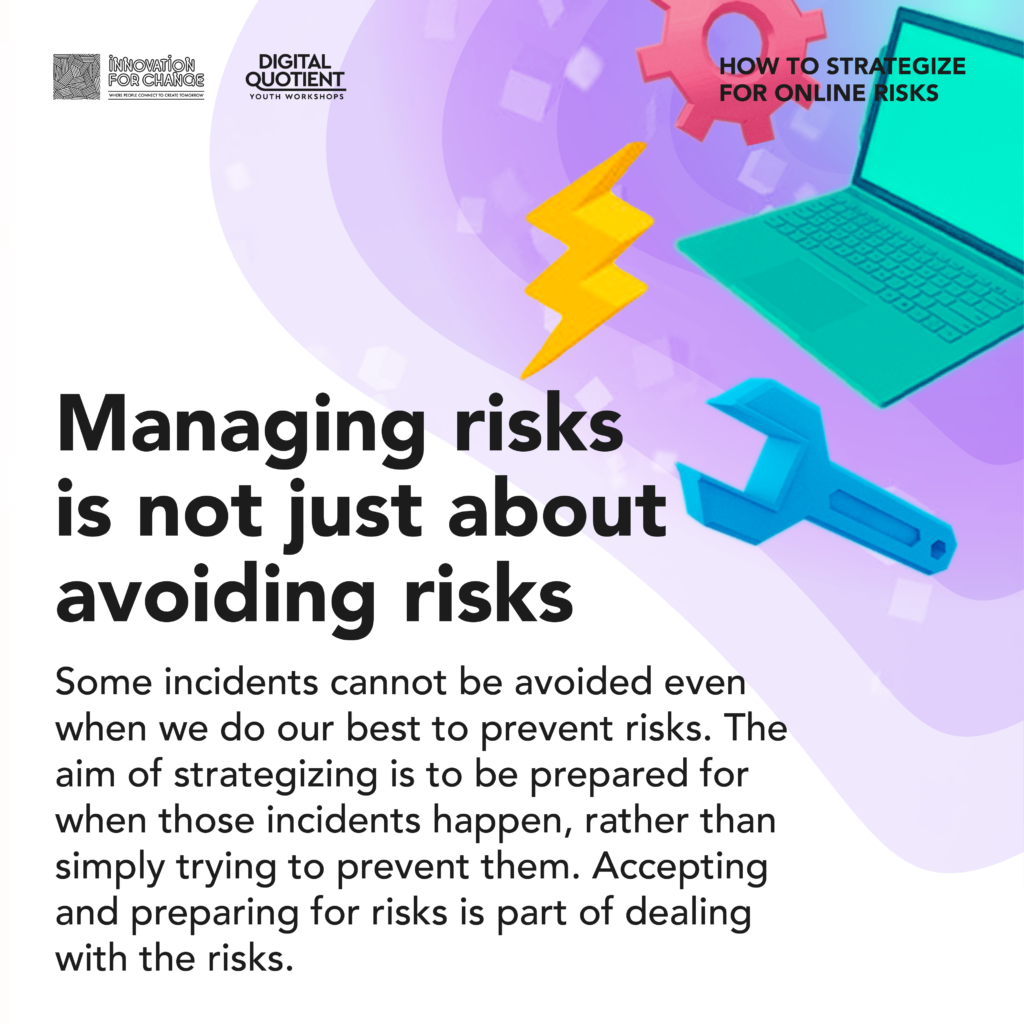 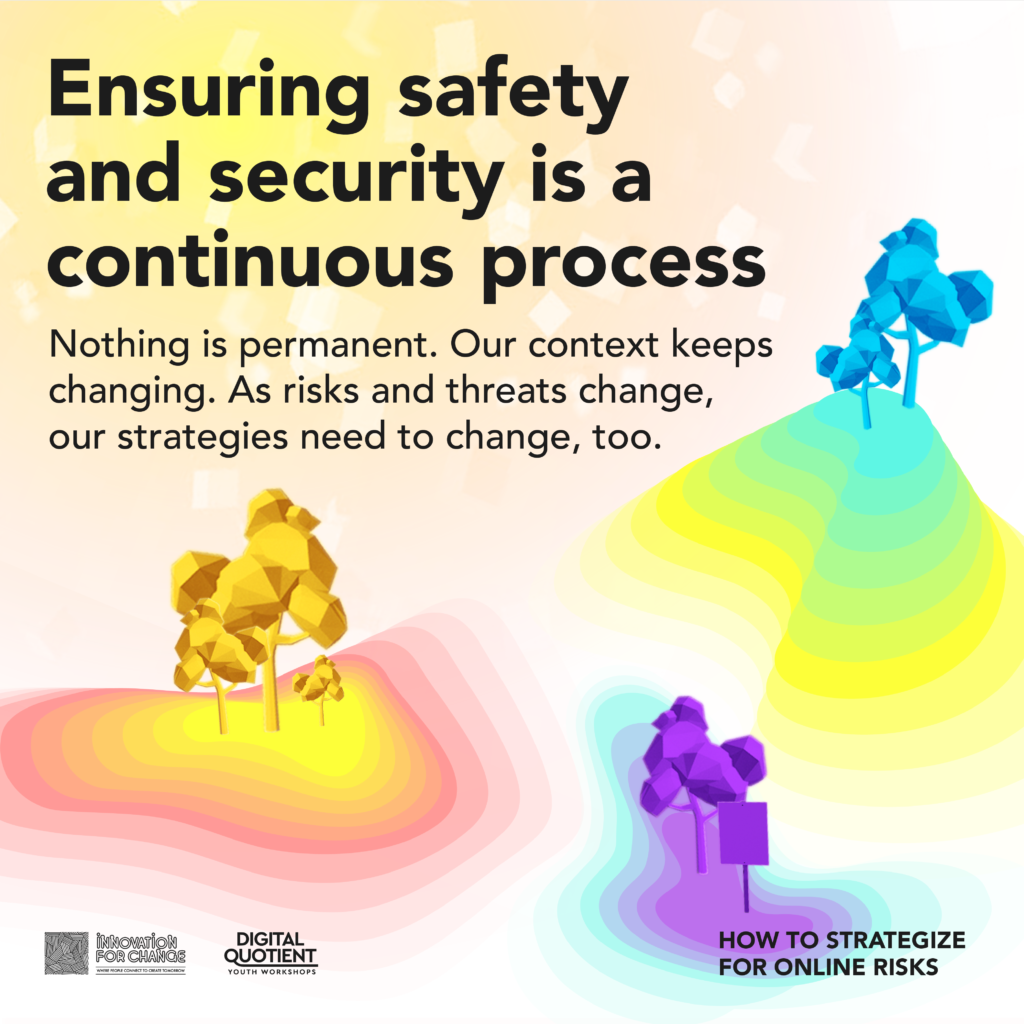 This time, three groups were provided with one case study to discuss and unpack strategies to respond. The scenario was about a peaceful protest during Pride month which resulted in an online harassment incident targeting two women protesters. Some participants felt the case was confusing and overwhelming – needing to think through in different angles. The case study was complex but in a way, it was able to elicit an interesting response. Through the group work, participants were able to put themselves in a position of being attacked and feel the compounding impacts.

Common question from three groups was whether this kind of incident is at all preventable. In fact, one of the key lessons that were carefully designed through this case study discussion was precisely that. Even if we do our best to prevent risks and ‘perfect’ the plans, some incidents cannot be avoided and are bound to happen. Our aim of strategising should be then trying to prepare when an incident happens, rather than preventing an incident.

This group work really brought many participants to an Aha moment and intrigued them to focus more in depth. Perhaps this also reflects the fact that many activists struggle with the attacks against them and the rampant online harassment. Another point of discussion was how do we turn the narrative in our favour.

“What can be done is to plan ahead on how to turn the narrative around, the incident can be used as an evidence why you went to the protest in the first place and reinforce the message.”

After discussing quite an overwhelming Gender-Based Violence case study in the previous session, we unpacked the ‘anatomy of hate’ facilitated by one of our resource persons. We had a deep dive on what is happening in the ‘hate space’ – what are the architecture, culture, and how do these allow proliferation of hate, etc. There are two currencies around the design of social media which are ‘relationship’ and ‘engagement’. Everything on social media is basically a business model, created to be able to sell and make profit. With this, the social media company then aims to grow extreme content as it multiplies engagement based on users’ relationship. On the more hopeful side, we can use social media as a powerful mobilising tool. However, in so doing we need deeper understanding on these platforms to make a deliberate engagement and devise tactics that serve our purpose.

More discussion on social media affecting participants’ movement followed which included but not limited to: how online algorithm has polarising effect on gender identity movement, the importance of online space for queer people, questions on how to hold social media accountable when their algorithm is closely attached to constructing our reality.

Managing mental health when being attacked online was also discussed. It was highlighted that you need not be in the (social media) space which is designed to trigger psychologically. The best thing for mental health can be to switch off. Disconnecting should not be seen or felt as being weak as many activists think that not fighting back means they lose, which is not. 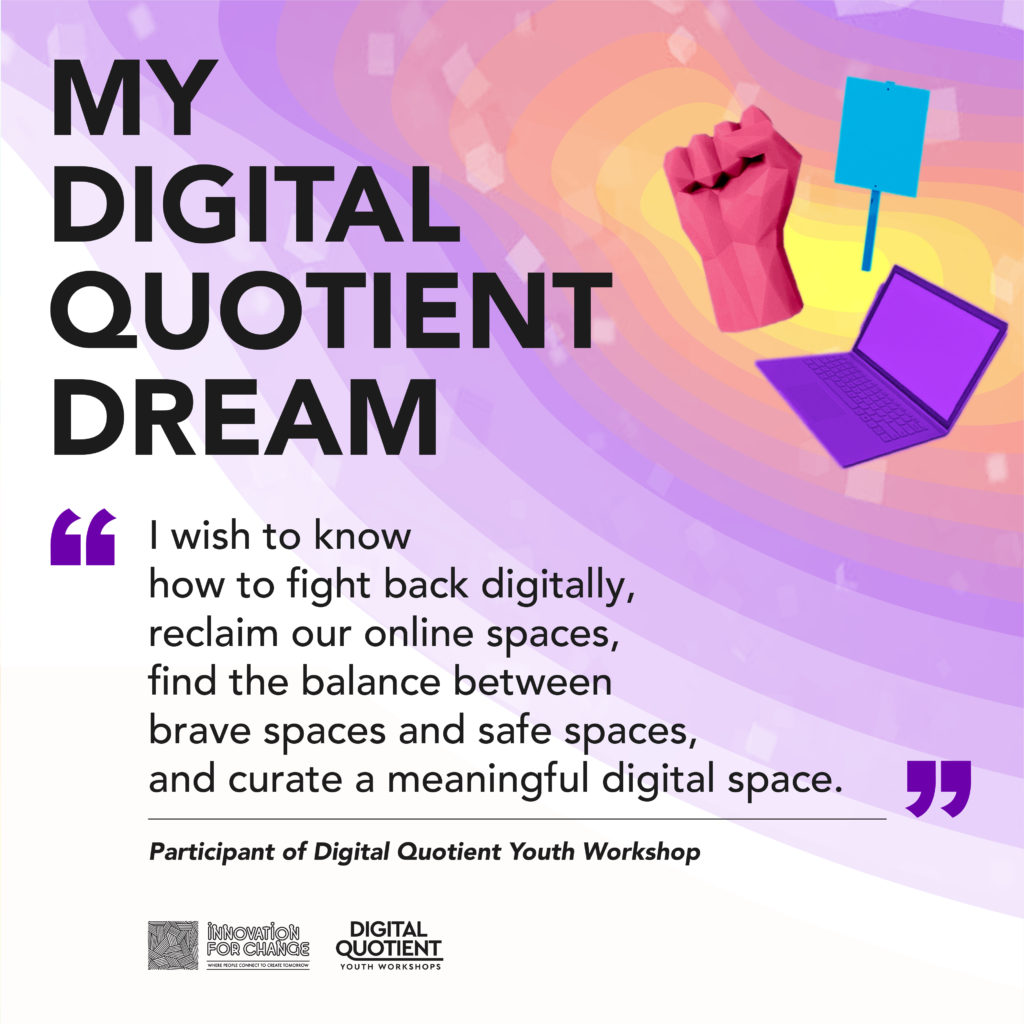 DQ or digital quotient refers to a person’s ability to maneuver within the digital sphere. Given that the  lives and the personal development of today’s youths are so highly integrated with technology and the  digital world, it is imperative for youths to develop a high digital quotient, specifically their ability to  safely lead empowered and transformative lives online and offline.

Yes, it needs to be more than just safe; it needs to be empowered and transformative as well. For the  Asian youth doing human rights work, the critical questions may also revolve around how to make the  internet a tool for justice and hope, how to use it to build the world they wish to live in online and off,

and how to form the communities and spaces they need to do that. In other words, what we need is not  only the digital quotient to protect ourselves against threats of surveillance and disinformation, or the  digital quotient to be more successful than others in a competitive capitalist world, but a digital  citizenship empowered to defend, expand, and create a digital democracy for equality, justice, and  human rights.

The DQ camp targets HRD youths for the potential multiplier effects with other youths, children, and  parents/senior citizens within their respective villages, communities, or spheres of influence. Originally  planned as a camp in early 2020, the sessions will now be held online in a series of webinars, due to the  COVID-19 pandemic. The planning and implementation of the online workshops will take place between  Feb and June 2021.